Myanmar, a country full of mysteries. It already starts with the name: do you call it Myanmar, Myanma, Myama, Burma or Birma? Westerners often don’t know much of the country except maybe for Aung San Su Kyi, civil wars and a military regime in the past. But Myanmar is more than that. It’s also a country with diverse landscapes, a rich culture and of course highly interesting railways ranging from a classical British colonial railway to a self-reliant railway under the military regime, from Fairlies and Garratts to self-built railcars and from zig-zag railways to mountain resorts of the British colonial rulers to adventurous lines through remote jungle areas. The railways in Myanmar offer it all. Nearly 1,000 steam locomotives, more than 600 diesel locomotives, more than 500 railcars and nearly 20 electric locomotives were or are still active on railway tracks on the state railway or the around 50 non-state railways throughout the country.

How it started for me

One might ask why somebody catches an interest in such a strange topic as railways in Myanmar. My interest in railways started when I “inherited” my father’s Märklin model railway at the age of around six. Initially just a toy I started to become interested in the “real” railways and their history when I got additional space in my parent’s house basement to build a larger scale model railway not only being a toy but rather following the standards of the real railway. Coming from the southwestern part of Germany I focused only on the history of railways in the province of “Baden-Württemberg”. But as so often the model railway never was finished; but when I had finished my studies and moved out, the model railway had to be removed to make space for a sauna. My first own apartment had about twice the size of the “model railway room” and thus my interest in railways was replaced by travelling to Southeast Asia after I had made several internships in Singapore throughout my studies. Myanmar soon became my favorite place without realizing that a railway even existed there. In December 2007 I visited Bago and Mr. Han, the receptionist of the hotel where I stayed, asked me whether I wanted to make a temple tour with him on the following day. I agreed and the next morning I found myself on the back of a motorcycle driving from temple to temple in Bago. It was just a few months after the terrible cyclone Nargis had hit the country and I was the only tourist in the city. So I asked my guide Mr. Han about tourist numbers and his business. “Not many tourists this year, but still enough as I’m specialized in railway tours” was his answer which brought me to the question why somebody would come to Myanmar for railways. "Well, Bago is the last place where they have steam locomotives running!”. The 21st century is already seven years old and there is still a non-heritage railway with steam operations? “I want to see it!” was my reply. So we skipped the remaining temples and headed towards Bago shed. And there she was: steam locomotive YC 629 gleaming in the sun and waiting for departure. I was infected immediately with the “railway virus” again and spent the upcoming days with Mr. Han and chasing steam trains on the back of his motorcycle. Steam operations ceased a few months later, but soon I discovered the “Namtu Mines Railway” and further trips to Myanmar fully dedicated to the railways followed. 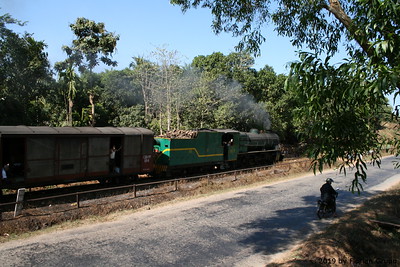 Figure 1: That's how it started. Chasing a steam train near Mokepalin with Mr. Han sitting on the motorbike and waiting for me.

What's the name of this country?!

I already mentioned the countries mysterious name right at the beginning of this chapter. The British called their colony “Burma” based on the “bamar” which form the largest ethnic group in the country. In 1988 the military junta had changed the name of the country to Myanmar, a name also based on the “bamar” and already used in the past by Marco Polo. Since then the naming of the country sparks controversy. While some people say that using “Myanmar” would mean supporting the military junta, others say that a country has the right to abandon its name lasting from colonial rule independent of its form of government. I tried to find a compromise: in case of historic contexts I will be using the name “Burma” while using “Myanmar” in all other cases. Alongside the countries name the military junta also changed names of other geographic places like cities, regions and rivers to make their Latin writing closer to their Burmese pronunciation. As the country uses Burmese script for writing and as there is no fixed translation to Latin script, same places might have different Latin writings. The following table shows the most important geographical names in colonial times as well as their current names in possible different Latin writings.